Lviv Klez Fest, the VII international Festival of Jewish Music, will take place in August 18-31, 2015 in Lviv. The festival will be special this year and it will start a new tradition – to choose the best Lviv Klez Fest dish. Here are 5 festival events to be worth visiting!

During the festival of Jewish culture the best dish will be chosen each year. The dish winner will be in the menu during the next year in two restaurants of Jewish cuisine in Lviv: "At the Golden Rose" Galician and Jewish restaurant and "Jerusalem". Everybody can take part in the competition: professional and not professional cooks, housewives who can prepare authentic Jewish dishes.

The competition will be held in two stages: 16 August (Sunday), 13:00 - dish preparation by the participants; 30 August (Sunday) - winner announcement, awards and the concert.

There is a chance to spend a unique dancing evening for tango fans together with “TangoKlezmerProject”, the band from Argentina. The event starts at Rynok Square ("Diana at Rynok Square" open air café) and then continues in “Arsenal” (5 Pidvalna Str.).

Location: Rynok Square (the North side)

Information about Lviv Klez Fest: All-Ukrainian Jewish Charitable Fund "Hesed-Arieh”, the American Jewish Joint Distribution Committee “Joint” and !FEST Holding of Emotions have organized Lviv Klez Fest, the International Festival of Jewish Music, for the past 6 years (since 2009). It’s not just the concert, lasting for several days. Jewish melodies and songs can be heard on many venues of the city during weeks; guests can watch dancing performances and theatrical plays, take part in singing and dancing master classes; the kids can enjoy children’s events. Each festival always has got its “zest”: theatrical Jewish wedding in the downtown of Lviv at Rynok Square. The open air gala concert is traditionally an unforgettable performance of Jewish stars who arrive from different countries of the world – Ukraine, Russia, Moldova, Poland, Austria, Germany, France, Great Britain, Sweden, Israel, USA. 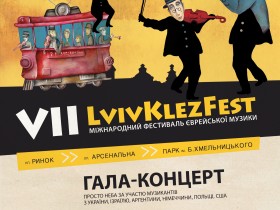 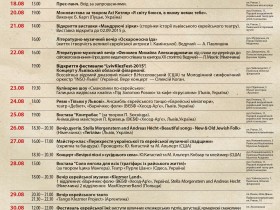