We’ve got a nice kitchen, skillful cooks and good friends. We’ve decided to unite everything and arrange a culinary master class at Galician and Jewish restaurant "At the Golden Rose". 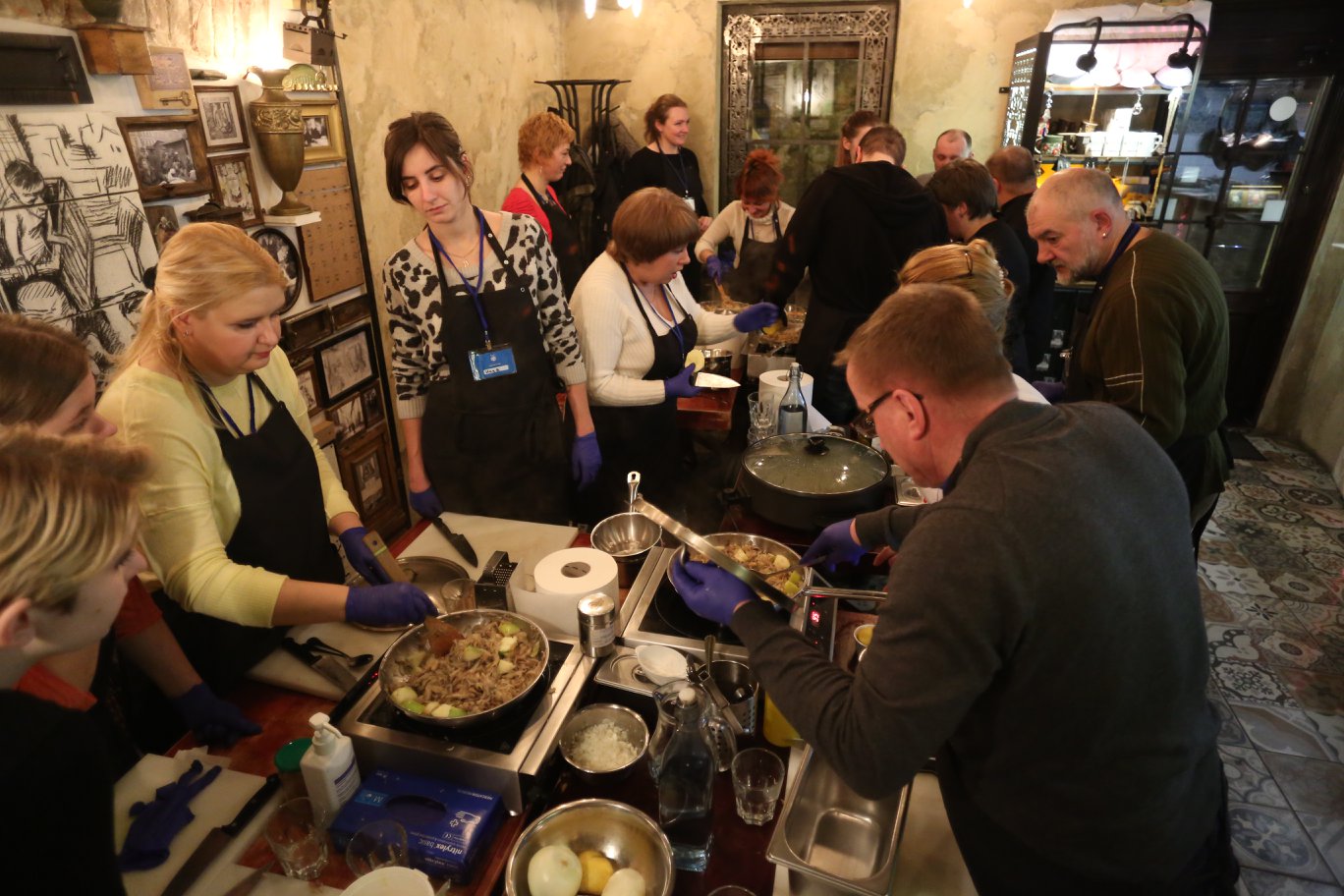 We already had 4 master classes, but this time we changed our format. Fish was the main theme. Participants were coached by Svitlana Kostyshyn, chef of "At the Golden Rose" restaurant, also our friend Mrs. Stepha, Galician cuisine expert, assisted us.

This fish master class was organized by Serhiy Pozhar, a culinary expert of Galician cuisine at “!FEST” Holding of Emotions. “Fish is a symbol of Christianity,” he commented. - “Jesus Christ provided fish meals to all Israelis. It’s a symbol of prosperity, wealth and land fertility. Only fish didn’t die during the flood. That’s why, people of Israel make associations themselves with fish in waters of life.

Everyone knows that the first settling of Jewish people were on one of the oldest streets in Lviv, and the main product to sell was fish. It was bought by restaurant owners and other locals. Where else but here, in Staroyevreyska Str. we’ can tell you about fish dishes, how to cook and enjoy their delicacies.” 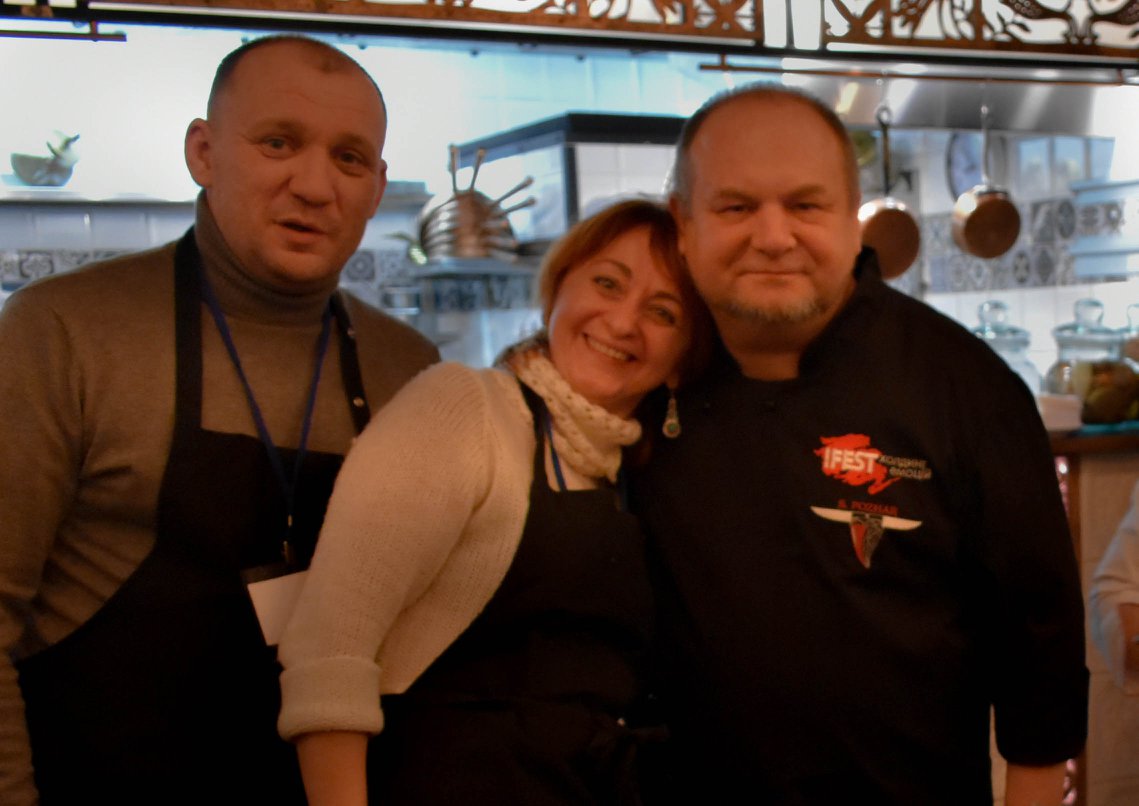 Fourteen people were enrolled in the master class and were divided into two teams; each of them prepared different dishes. Mrs. Stepha (Marianna Dushar) and Svitlana Kostyshyn were the leaders of the teams. 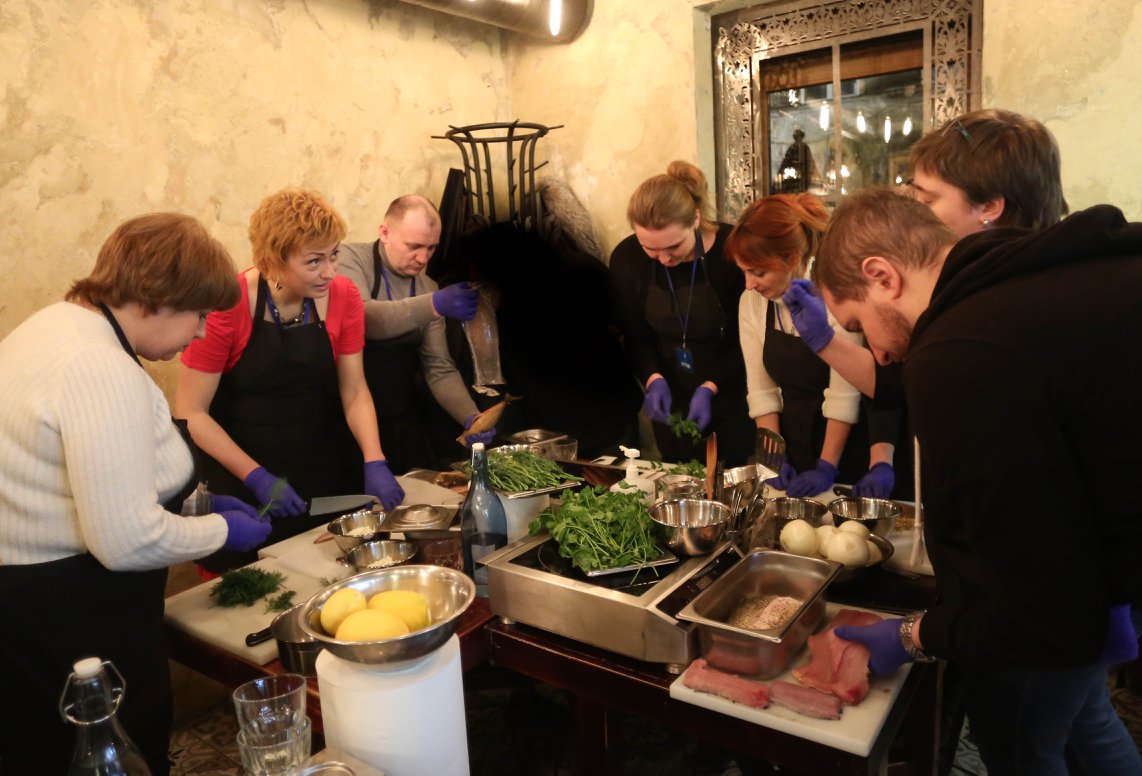 We cooked all dishes, talked about fish - how it was cooked previously in Galicia and not only here :-). Later on, we tested our dishes amongst agreeable conversations. 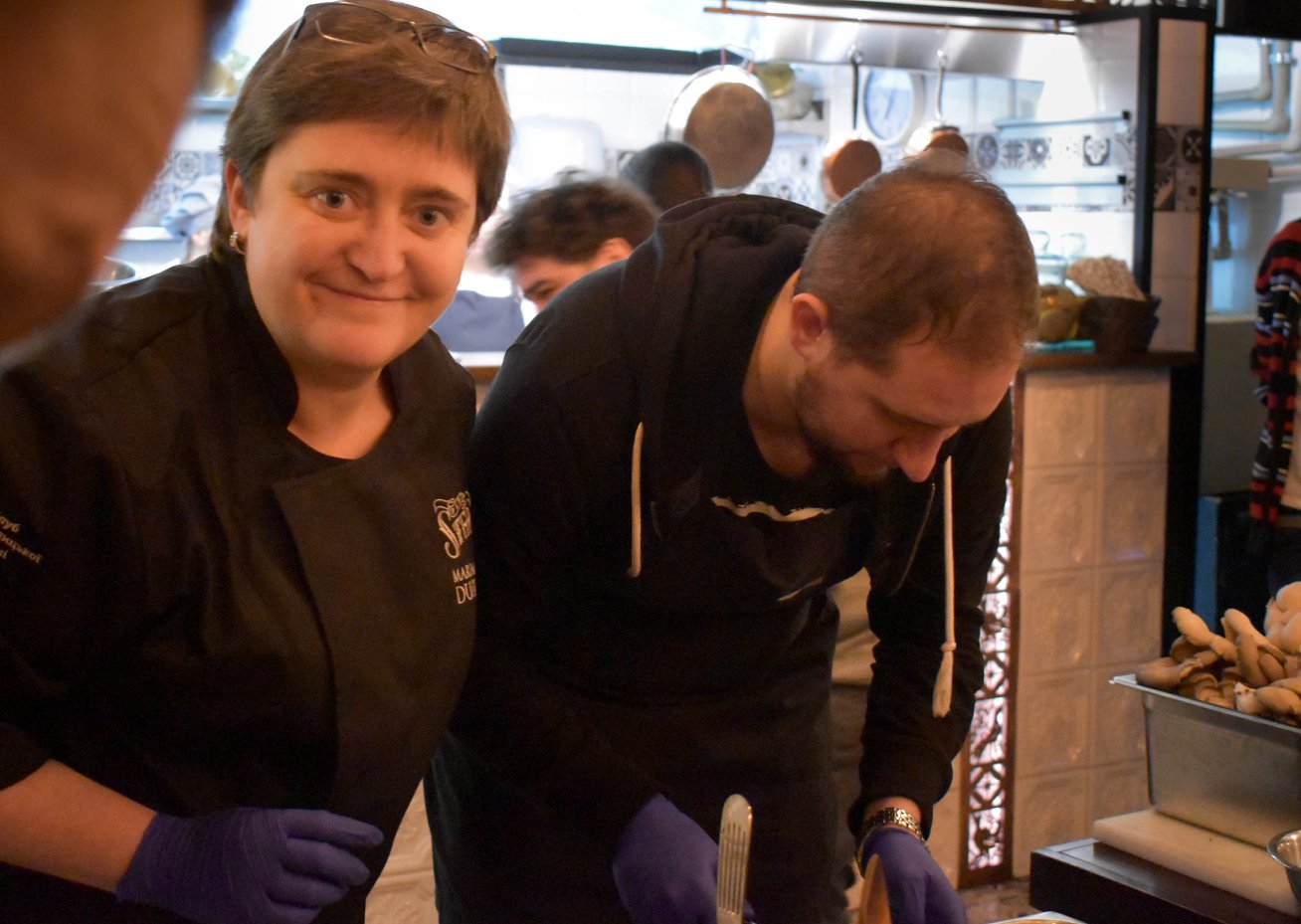 What is the quickest and tastiest way of cooking fish at home?

Fish has always had a special place in everyday life. Firstly, it’s economical side - you could catch and eat fish, or catch and sell, or change into anything else. Actually, fish that didn’t cost anything became a subject of sale. Secondly, fish is a source of protein. It’s one of the products that is allowed to eat during the Lent period. And, of course, it’s a loaded source of protein. Thus, we’ve had a plenty of fish recipes that are being used nowadays.

How did grandmothers cook fish?

If speaking about recipes and methods of preparation, we should differentiate rural and urban cuisine. Rural cuisine is more practical, whereas urban is more “elaborate”, it has more additional ingredients.

For example, dried salty fish is the easiest way to keep fish for a long time. Now this kind of fish is an appetizer but there are recipes when borsch or fish soup is cooked using such fish. Let’s also mention baked fish in straw. In comparison with the previous method where small fish is used, here bigger fish are baked because they have more meat.

And, of course, smoked, roasted, stewed or fried fish - all these methods aren’t new. Only fried one is the youngest method because frying wasn’t so popular in our cuisine.

Urban cuisine is much more interesting. There were markets in the city, where people sold not only common products. Shoppers could buy Baltic salty herring and different kinds of fish from the Black Sea. Certainly, local fish from the Dnister and Dunay rivers were sold, too. That’s why, the recipes were somehow different.

For example, we can find information in books by Olha Franko (1929) that there were more than 10 methods of pike recipes, various recipes for pike perch and carp, catfish and pike cutlets as well as sturgeon, river trout, tench, burbot, eel…from aspic to stuffed and baked fish.

What unusual fish dishes do you know? You’ve prepared fish tripe at the master class.

In fact, fish is good because it can be quickly prepared and eaten with different add-ons, sometimes rather unusual. For instance, fish tripe prepared from carp belly that we made at the master class. It’s not a usual dish if you read the ingredients - cabbage, oyster mushrooms, onion, prune, apple, various spices and, of course, sliced carp belly. At first, an odd dish but very tasty.

I love fish, but “there is no best fish as sausage :) I can’t say that I adore fish because I don’t like to take out fish bones. So, the best fish for me is the one with few bones and are easily removed. I enjoy eating fried or baked mackerel. I love fried sardines in corn flour and marinated herring with spices.

My favourite fish recipe is “marinated herring served on apples”. It’s a very easy preparation: herring fillet is marinated in vinegar sauce with spices and served on grated apple and onion with sour cream. To garnish use some cranberries - it looks nice.

If you take carp that has a lot of bones, the best recipes are as follows: Gefilte fish that is one of ways of stuffed fish or baked carp with carrot and onion and you should bake longer, so small bones are baked enough.

What spices or add-ons and drinks can you recommend with fish dishes?

Fish goes well with either beet with horseradish or horseradish with egg and sour cream. Delicate beer mustard, for example, is best with fish, too.

Of course, a glass of white dry wine or a shot of vodka will be great, too. But you must be sober and not drink a lot. Fish phosphor tends us to be wiser ;). 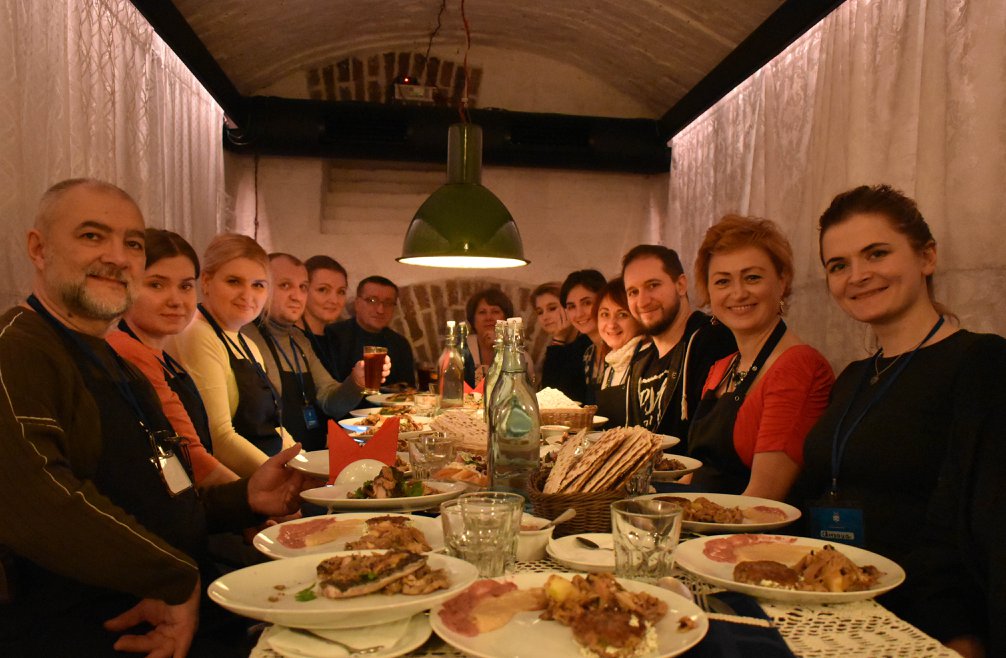 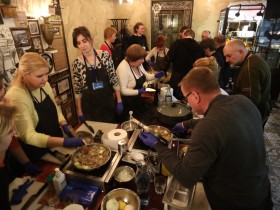 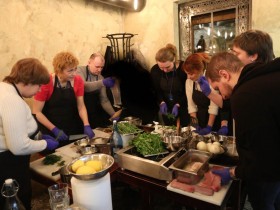 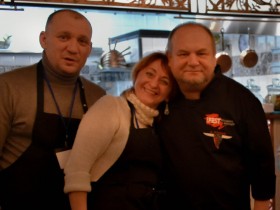