A reception with the mayor

Only 5 Lviv trade marks were invited by the Mayor on occasion of the City Day. There were Lviv Handmade Chocolate and DIDO among them.

Everything began as usual with the competition between the tables decorated with sophisticated tablecloths from the hosts and our stuff - we have brought wooden carts!!!

The reception was held in a canteen of the Ukrainian Catholic University, which is still being under construction.

In other words, half plastered walls, concrete floor, composting toilets are outside. Everything as usual: the canteen is not finished yet but it already works. Despite this, the atmosphere was absolutely fantastic. There were nearly 600 people at the celebration. Musicians, businessmen, clergymen. And there it was - our Chocolate and Dido.

The service was fast, but queues did not come to an end.  And besides gentlemen wore tailcoats, and ladies were in cocktail dresses, they all ate our Dido (organic meat). They consumed 10 kilograms of it!!!
Here is a funny story. At first some ladies from competitive bakeries said, "Ugh! The whole hall stinks with your meat!” On the other hand, we were so busy answering the questions of the “Dido” - fans: "Where are you curing the leg? Really in Lviv? It’s amazing!" And the arrogant ladies were feeling lonely for nobody was lining up next to their stations.

It was a great honour to be represented on the main reception of the city.

P. S. We would like to say a big "!FEST" thank you for organization: Lviv Chocolate Manufacture, in particular, Vita and Olenka, The First Grill Restaurant of Meat and Justice - Olya and mega Jam?n-maker
Petro as well as Ruslan Salo, Serhiy Kremlyovskyy and the incredible Mr. Bohdan. We have shown who we are! 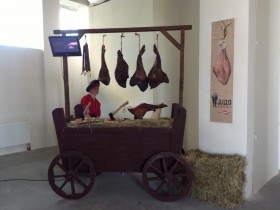